Burns&Beyond, Edinburgh’s flagship Burns Festival made a surprise return to the city in March to spread Love, Hope and Kindness with the Scottish premiere of Yvette Mattern’s spectacular Work of Art – Global Rainbow – which lit up the skies above the capital.

Originally scheduled for late-January as part of the capital’s Burns Night celebrations, but postponed due to lock-down restrictions, this stunning light installation was visible across the skies over the North of the city from 24 – 26 March.

Penny Dougherty and Alan Thomson, Directors of Unique Events, said “As we pass the one-year anniversary since lock-down restrictions began, reflecting on the year past, but now looking ahead with renewed hope and optimism, we believe it is more important than ever to let some light back into our lives, celebrating the work of our NHS Staff and key workers, and looking forward to a brighter future for all.” 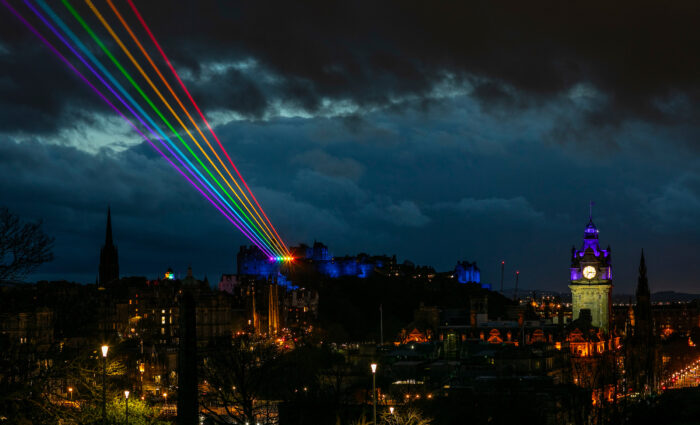 Internationally renowned artist Yvette Mattern brought her poetic, magical and powerful Global Rainbow to Scotland for the first time to light up the skies above Edinburgh. The rainbow has been imbued with added significance during the Covid 19 pandemic, with symbolic association with the NHS and our visual support of, and gratitude to, the nation’s key workers.

Global Rainbow beams seven parallel horizontal rays of high specification laser light, representing the spectrum of the seven colours of the rainbow, and is designed to be viewed safely outdoors from a distance. Having recently been shown in Kobe, Japan, Edinburgh joins a list of international cities to present Global Rainbow including New York, Berlin, Sao Paulo and Toronto.

Yvette Mattern said “I witnessed the most strikingly dramatic and spectacular rainbow crashing through what seemed like apocalyptic clouds hovering over Walden Pond, Massachusetts on the first day of 2007. I was deeply moved and inspired to replicate this vision artistically. This year, more than ever before, Global Rainbow can bring together communities to look ahead to a brighter future, while reflecting on the year past. Edinburgh is a perfect stage for the installation and I’m was very excited to see the Rainbow reach out above the city.”

Global Rainbow was presented by the Burns&Beyond Festival, created and produced by Unique Events, with the support of the City of Edinburgh Council, EventScotland, Essential Edinburgh, Johnnie Walker and with special thanks to Edinburgh Castle. 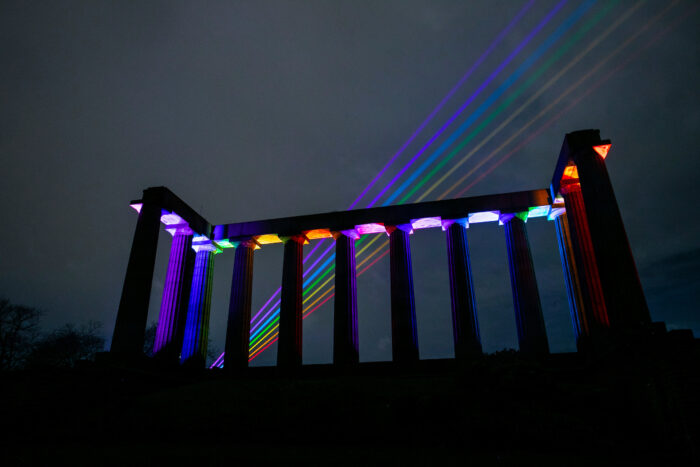